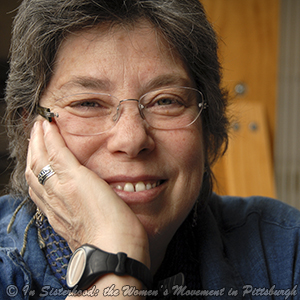 Ann Begler (b. 1950) was born in DuBois, PA where her parents operated a women’s clothing store. She graduated from the University of Pittsburgh (1971) and Duquesne University Law School (1974).

Ann Begler’s involvement in the women’s movement began at the University of Pittsburgh. As President of the Panhellenic Council, she was appointed to the Chancellor’s Advisory Committee on Women to review the status of women at the University. She began to understand the issues of sexism and discrimination on both the personal and institutional levels.

Following law school, Ms. Begler worked as Allegheny County Assistant District Attorney in the Crimes Person Unit prosecuting sexual assault cases and later opened a private practice.  Ann represented both Pittsburgh Action Against Rape and the Pennsylvania Coalition Against Rape on cases that substantially changed the way sexual assault victims were to be treated within the justice system. In a landmark case, she successfully argued for confidentiality between a crisis advocate and sexual assault victim.

Ann Begler was a founding member of the Wild Sisters, a feminist collective that created performing and gathering spaces for women from 1975 to 1983. They “saw music as a way to reach a large segment of people and to deliver a message that had a political and social consciousness to it” (Begler, 2008). Initially they organized coffeehouses featuring local women musicians, then they produced concerts featuring prominent feminist musicians such as Meg Christian.  In 1982, they opened a restaurant to provide a space for feminist music, art and poetry. The Wild Sister’s Cafe was a hub of feminist culture in Pittsburgh from 1981-1983.