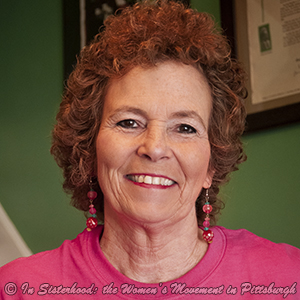 Ms. Feeney was drawn to the activist community when she first enrolled at PITT in 1968. She became an active member of Thinking Students for Peace, a group against apartheid in South Africa and against the Viet Nam War.  In 1972, she organized and secured funding for Pittsburgh Action Against Rape, the second rape crisis program in the nation. She was active in the local chapters of the National Organization for Women (NOW) throughout the 1980s, serving as President of East Hills NOW and on the Executive Board of Pennsylvania NOW.

Ms. Feeney began playing guitar in high school and joined Cucumber Rapids, a bluegrass band, in 1976. They disbanded in 1977, but she continued to perform locally and released her first recording in 1987.  She won a national songwriting contest in 1989, which was a turning point in her life. She embarked on a new career as a professional folksinger. Ms. Feeney has toured North America and the world to perform and participate in political and labor rallies and events.  She served as president of the Pittsburgh Musicians’ Union (the only woman ever elected to this position) from 1997-1981.