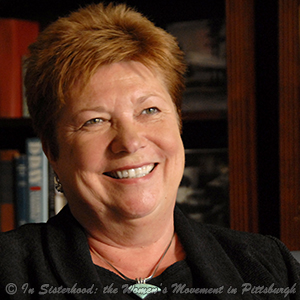 Barbara Hafer (b.1943) was raised in suburban Pittsburgh. Like her grandmother, aunt and sister, Barbara became a nurse.  She worked as a public health nurse in the Mon Valley, an industrial region southeast of Pittsburgh, where she was radicalized by the poverty, abuse and bad nutrition.  In 1974, while a stay-at-home mother, Ms. Hafer became involved in the women’s movement, joining both the South Hills NOW chapter and the Pittsburgh chapter of the Women’s Political Caucus.  She became the first Executive Director of Pittsburgh Action Against Rape (1974), founded the Mon Yough/Allegheny County Rape Crisis Center (1975) and was a founding member of the Pennsylvania Coalition Against Rape (1975).

Through her work in public health and crime victim services, Ms. Hafer saw that the real power to implement change lay with those who control the public purse strings. She started to get politically active in the Mon Valley, serving in a variety of volunteer positions over five years.  Given her moderate, pro-choice stance, Ms. Hafer was persuaded to join the Republican party and received financial support from members of the Women’s Political Caucus when she ran for office.  Once dismissed as “a little nurse from Elizabeth,” Barbara Hafer was elected as the first female Allegheny County Commission in 1983.  She became a player in local politics and was re-elected to the County Commission in 1987. Then, Ms. Hafer became a player in state politics.

She was elected state Auditor General in 1989, re-elected in 1992 and elected state Treasurer in 1997. Barbara said, “the feminist movement really gave me an opportunity to be able to do what I wanted to do and step into a leadership position. But, it was nursing that prepared me (Hafer, 2008). Barbara retired from politics in 2005 to found Hafer and Associates.