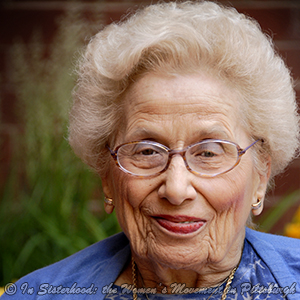 Barbara K. Shore, Ph.D. (1920-2013) was an influential leader at the University of Pittsburgh (PITT) and in the community.  Dr. Shore championed the idea of advanced doctoral studies in social work and directed the doctoral program in the School of Social Work at the University of Pittsburgh. She co-authored two books and more than 50 articles in her field. At PITT, she also served three terms as president of the faculty senate and chaired many other committees.  Dr. Shore served in many positions in the National Association for Social Work  (NASW) and they recognized her as an NASW Social Work Pioneer for her many achievements in her field, at PITT and in the Pittsburgh Community.

Known as a consensus builder, Dr. Shore was at the forefront of social justice movements for civil rights, women’s rights and gay rights and against the Viet Nam war in Pittsburgh. The civil rights movement “just drew me right in” and she was active in that movement throughout the 1950s and 1960s, participating in marches and getting arrested.  Her name is enshrined at Freedom Corner on Center Avenue as a Legend of the Civil Rights Movement.  During the Viet Nam War, she was speaking up, speaking out on radio and television, writing letters to the editor about why the war was wrong.  She served on over 30 boards and task forces, but is most well known for her co-founding the Mon-Yough Rape Crisis Center (later the Center for Victims of Violent Crimes) and Persad Center for Services to Gay and Lesbian Persons.