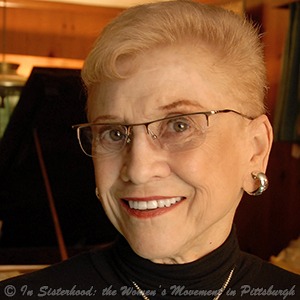 Dorothy (aka Cindy) Judd Hill (b. 1926) was raised in Duquesne, an industrial town near Pittsburgh. She earned a bachelor’s degree in music from Westminster College.  Unlike many of her peers, Ms. Hill was employed outside the home. She taught music at Chartiers Valley High School from 1953 until her retirement in 1984.

Ms. Hill became a poster case for the nascent National Organization for Women (NOW) in 1967.  She had been granted a one-year sabbatical to earn a master’s degree, but was fired when she returned from the leave. While Ms. Hill had earned a master’s degree, she had also had a baby.  At the time, the rules said a teacher must report a pregnancy within the first four months, then take a year’s maternity leave without pay. However, the new federal Equal Employment Opportunity law forbade employment discrimination. With the support of NOW and the Pennsylvania State Education Association, Ms. Hill sued the Chartier’s School Board. After a two-year struggle, Ms. Hill was reinstated as a teacher in 1968.  But, she was assigned to teach music in elementary or middle schools rather than high school for the remainder of her career.

Having set a precedent in her sex discrimination case, Ms. Hill became an activist for women’s rights.  She was a founding member of the Greater Pittsburgh Area chapter of NOW in 1967 and the South Hills chapter in 1972; she remained active in the South Hills chapter until it disbanded in 1994.  Although she was employed, Ms. Hill joined the picket against the Pittsburgh Press’ practice of segregated employment ads, lobbied state and federal officials on both the ERA and abortion, and spent a six-month unpaid leave in Chicago working to pass the ERA in Illinois.  She served as co-president of South Hills NOW in 1986.  She has attended 40 annual conferences of NOW.