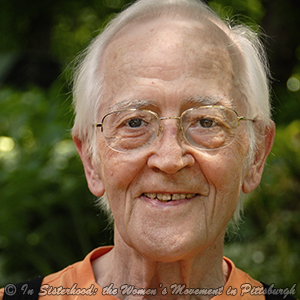 Gerald Gardner (1926-2009) was born and raised in Tulamore, Ireland. He earned a master’s degree in applied mathematics from Carnegie Tech in 1948 and later earned a doctorate in mathematical physics from Princeton.  Mr. Gardner met Jo Ann Evans while studying in Pittsburgh. They married in 1950 and moved to Ireland where he pursued his career and she chafed at being a housewife.  The Gardners returned to Pittsburgh in 1956. He secured a position as Senior Scientist at Gulf Oil.

The Gardners joined the Greater Pittsburgh Area chapter of the NOW in 1968, just a year after it was founded by Wilma Scott Heide. Sex discrimination in employment was a major issue and Ms. Heide challenged Gerald to look at the employment ads for women’s jobs to see if he could find a job suitable for his qualifications. He was shocked to find that only one job was remotely related to mathematics. Ms. Heide then recruited him to testify about the statistical chance that a woman could get a job advertised for “men only” at a hearing before the Pittsburgh Human Relations Commission.

Mr. Gardner became chair of NOW’s Employment task force and actively challenged institutional practices of sex discrimination.  In the most notable case, he filed a complaint on behalf of NOW with the Human Relations Commission against the Pittsburgh Press. The complaint contended that publishing separate male and female help wanted ads discriminated against women. When the Commission upheld the complaint, the Pittsburgh Press filed a lawsuit claiming the ruling violated their First Amendment right to freedom of the press. The case was eventually settled when the U.S. Supreme Court ruled the Press’ practice violated the Pittsburgh anti-discrimination ordinance and was not protected by the First Amendment.  Mr. Gardner reported “that was a very satisfying outcome” (2008).

Mr. Gardner was also a co-founder of K.N.O.W., the first feminist press in the nation, a co-president of the Greater Pittsburgh Area chapter of NOW and the first man to be elected to the national NOW board.  A shy, but principled man, Mr. Gardner was most comfortable and formidable behind the scenes using his mathematical skills to build a case for women’s rights.