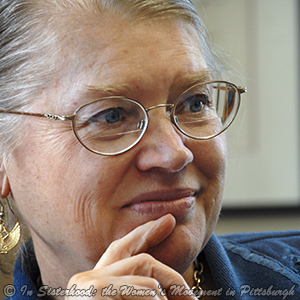 Irene Frieze (b. 1941) was raised in Los Angeles and earned a Ph.D. in psychology from the University of California at Los Angeles (UCLA) in 1973. She was hired with two other women faculty to develop a formal Women’s Studies (WS) Program at the University of Pittsburgh (PITT) in 1972.  She has been affiliated with WS since the founding and served as Director of the program in 1980.  Frieze’s feminist activism has been focused on breaking down barriers to women within the university and the profession of psychology.

Frieze was a pioneer in the field Psychology of Women. Experiencing the lack of support for their concerns by the American Psychological Association (APA), Frieze and other women formed the Association of Women in Psychology (AWP) in 1969.  Frieze co-taught a course on Psychology of Women in 1971 while she was a graduate student and co-authored the first textbook in the field, Women and Sex Roles: A Social Psychological Perspective, in 1978.  She and her students hosted the 10th Association for Women in Psychology Conference at PITT in 1979. She has been Editor of the Sex Roles: a Journal of Research since 2005.

Frieze and Maureen McHugh co-organized a Tri-State Women Studies Conference in 1985 to provide a network for women academics in the region to connect with colleagues, meet leading feminist scholars, improve their teaching and gain regional recognition (Brochure).  Moving to different campuses each year, the Tri-State Women Studies conferences were a valuable resource for feminist faculty in the Pittsburgh Region for 12 years.

A major strand of Frieze’s research focused on violence against women and later addressed violence by women in intimate relationships.  Her books include Hurting the One You Love: Violence in Relationships (2001) and Stalking: Perspectives on Victim and Perpetrators (2001).  Relatedly, she was Associate Editor of the journal Violence and Victims (1985-1999). Frieze has received many honors and awards for teaching, research and service at PITT and in the field of psychology.