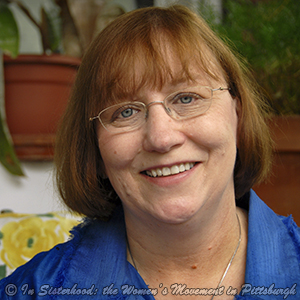 Jeanne K.C. Clark (b. 1949) was raised in Natrona Heights, PA. Ms. Clark was active in the anti-war and women’s health movements while a student at Boston University in the late 1960s.  Returning to Pennsylvania, she ran an anti-war program in New Kensington (1972-1974) and learned about the National Organization for Women (NOW).  She founded the Alle-Kiski NOW chapter (1973), attended the first Pennsylvania NOW conference (1974) and found her passion.

Ms. Clark married Timothy Sullivan II in 1976 and moved to Brookline, a Pittsburgh suburb, with him and his two children. She joined the South Hills NOW chapter founded by her friend Eleanor Smeal.  According to Ms. Clark (2008), they “lived and breathed building the movement.”

Ms. Clark was one of only a few who had the opportunity to work as a career feminist. She served as director of the Allegheny Women’s Center (1977-1986), an abortion clinic in Pittsburgh, and as national press secretary for NOW (1986-1988).  She also coordinated press outreach and coverage for more than a dozen marches in Washington, D.C. (1986-2004).

While recruiting women in Pennsylvania to run for political office in 1987, she was persuaded to run in the Democratic primary for the state senate seat representing the 43rd District.  She lost that election, but has remained active in feminist politics.