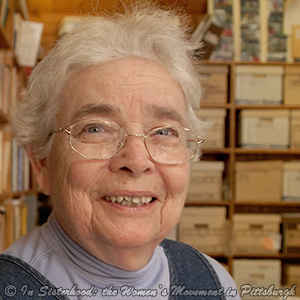 Jo Ann Evansgardner (1925-2010) grew up in Pittsburgh. In 1950, she earned a bachelor’s degree in psychology and married Gerald Gardner.  The Gardner’s moved to his native Ireland where he pursued his career as a mathematician and she chafed at being a housewife. The Gardner’s returned to Pittsburgh in 1956. She initially hyphenated their family names, but eventually combined their family names into Evansgardner.

Ms. Evansgardner earned a Ph.D. in psychology from the University of Pittsburgh in 1965. She was co-founder of the Professional Women’s Caucus in 1968, an organization that became the model for Women’s Caucuses within the professions. She co-founded the Association for Women in Psychology (AWP) in 1969 and became a key leader in the struggle to hold psychology intellectually and institutionally accountable to the experiences and political concerns of women.

Ms. Evansgardner joined the Greater Pittsburgh Area chapter of NOW in 1968 and found a platform to advance her ideas about women’s place in society. She recruited other NOW members to co-found K.N.O.W.. The first feminist press in the nation, K.N.O.W. reprinted essays and women studies syllabi to stimulate the growth of knowledge about feminism.

Ms. Evansgardner recruited and mentored some of the most prominent feminists in Pittsburgh while working tirelessly to break down barrier for women and girls.  She co-founded the National Women’s Political Caucus, served as co-president of the Greater Pittsburgh Area Chapter of NOW and as a member of the board of national NOW.

Ms. Evansgardner favored direct actions and was involved in sit-ins at local restaurants that provided male only dining rooms, picketing the Pittsburgh Press’ policy of printing sex segregated employment ads, disrupting the U.S. Senate Subcommittee on Constitutional Amendments, challenging TV stations’ treatment of women and lobbying elected officials on a variety of issues. In the process, she became known for publicly confronting her opponents.