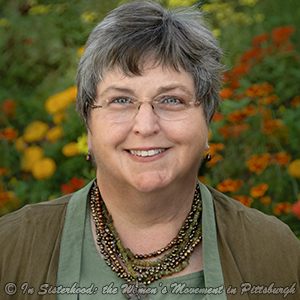 Ms. McHugh took the first women’s studies course offered at Chatham, which led her to examine sex differences in problem solving for her senior thesis.  The University of Pittsburgh started a women’s studies program in 1972 and Ms. McHugh was recruited to work with the professor who was pioneering the new field, psychology of women. This provided the opportunity to be trained to shape the way psychology of women is taught and to become part of the network of pioneering feminist psychologists across the country.  She was involved in a consciousness raising group at PITT and a feminist karate school that allowed her to make the connection between the personal and the political, including the need for women to be trained in self-defense. While she attended political and cultural events organized by the National Organization for Women (NOW) and other groups in the local women’s community and many national marches in support of the ERA, Ms. McHugh’s feminism was focused on scholarship and teaching, and breaking down barriers for women faculty in higher education.

Dr. McHugh has been active in both the fields of psychology of women and women’s studies locally and nationally.  She became active in the Association of Women in Psychology while a graduate student.  She and Irene Frieze, her mentor, organized the Association for Women in Psychology Conference at PITT in 1979 and started the Tri-State Women Studies Conference in 1985 to provide a network for women academics in the region to connect with colleagues, meet leading feminist scholars, improve their teaching and gain regional recognition. Dr. McHugh was then hired to establish a women’s studies program at Indiana University of Pennsylvania in 1987.  She served as director for eight years and co-organized the Tri-State Women Studies conferences for 12 years.  She is the Associate Editor of Sex Roles: A Journal of Research, a professional journal, and Director of the Leadership Institute for Women Faculty for the Pennsylvania State University System.  Dr. McHugh’s current research focuses on gender harassment and bullying.