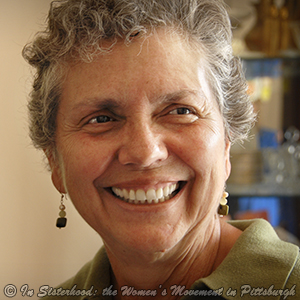 Molly Rush (b. 1936) grew up in Pittsburgh. She joined the Catholic Interracial Council in 1963 and embarked on a lifetime of activism. “A lot of it came out of the Catholic experience” (Rush, 2008). Catholics were protesting discrimination against Blacks, especially around employment and wage. Priests and nuns who were part of the Catholic Interracial Council also began protesting the Viet Nam war. She came to see protesting as one way of speaking against injustice that is a valued part of our nation’s history.  In 1972, Ms. Rush co-founded the Thomas Merton Center that is named after a Trappist monk. Radical Catholic pacifists who protested the continuation of the Vietnam War and against federal cutbacks to welfare programs were the traditional base of the Merton Center.

While Ms. Rush was primarily involved in the civil rights and anti-war movements, many of the people she knew were engaged in other movements.  She felt the movements learned from one another. Several friends were involved in the women’s movement and recruited her to join the South Hills chapter of the National Organization for Women (NOW) in 1974. Her involvement with NOW activities raised her consciousness about issues women faced in our society.  She participated in the first “Take Back the Night” march to protest violence against women in 1976 and was a delegate to the National Women’s Conference in Houston in 1977.

After the Viet Nam war ended, Ms. Rush began to focus on nuclear disarmament and campaigns of solidarity to support the people of Central and Latin American countries that were targeted by the Reagan administration.  She is most well known as the only woman member of the Plowshares Eight, a group of radical Catholics who entered a General Electric Co. plant in King of Prussia, PA in 1980 and assaulted the skeleton of a Mark 12A missile to protest the nuclear arms race. Ms. Rush spent 78 days in Pennsylvania jails until two Pittsburgh religious orders – the Sisters of Mercy and the Sister of St. Joseph – posted $125,000 bail. Ms. Rush’s steadfastness is guided by her Catholic faith and the feeling that much of what she does was for her kids.