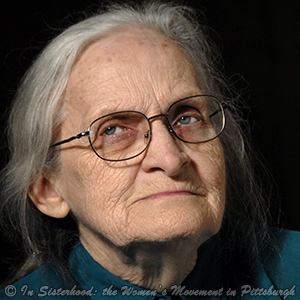 Phyllis Wetherby (b. 1928) grew up in Forest Hills, a suburb of Pittsburgh.  She worked at U.S. Steel Research for 29 years, first as a technical editor and later as a research engineer.  As a young adult, she was active in the 18th District Democratic party. She met Wilma Scott Heide, founder of the Greater Pittsburgh Area chapter of the National Organization for Women (NOW) during a political campaign and was told “You look like a NOW member. Why aren’t you?” (Wetherby, 2008). She attended a meeting of the Greater Pittsburgh Area Chapter of NOW, paid her dues and became a major figure in the Pittsburgh women’s movement.

With other NOW members, Ms. Wetherby co-founded and was actively involved in K.N.O.W., Inc.(1969-1983), the first feminist press in the United States.  She became the Convener of the Pennsylvania Women’s Political Caucus (WPC) and co-convener of the Allegheny County WPC in 1971, but left the caucus in 1974 with the sense that “it was easier to make politicians out of feminists than feminist out of politicians” (Wetherby, 2008).

Winning passage of the Equal Rights Amendment (ERA) became the central focus for Ms. Wetherby and other Pittsburgh NOW members. During the fight to gain extension of the time allotted to ratify and then to ratify the amendment in critical states, Pittsburgh feminists traveled by bus to Washington D.C. and to state capitols to lobby elected officials. They became known as “The Wetherby Wonders” because Phyllis rented the buses to insure there would be a critical mass of feminists lobbying for passage of the ERA.  She continues to be active in NOW and local politics.